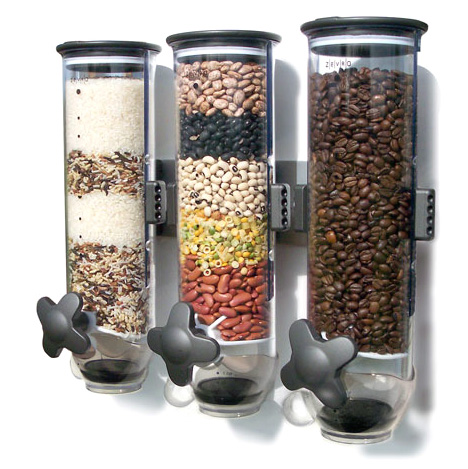 The Indispensable SmartSpace Countertop Dispenser takes the sleek style of the original wall-mounted SmartSpace and puts it within hands reach on the counter. Like our other dispensers, the SmartSpace Countertop Dispenser clears clutter from the kitchen with style. Its practical and user-friendly design caters to the health-conscious consumer. One twist of the wrist dispenses one ounce of perfectly portion-controlled product every time! With a 13 ounce canister capacity, the SmartSpace Dispensers is the perfect size for the city dweller or the space-conscious delivering convenience without clutter. Since it is designed for candy, nuts, beans, granola, toppings and more, it is versatile enough to fit a variety of lifestyles.

This video-portrait project portrays unique individuals telling you about themselves, who were filmed spontaneously on the streets of the world.

One night I was returning home from a friend of mine when I noticed an old man sitting on the stairs of a building, I made a comment that it isn’t very healthy to sit on the cold stone, and the conversation turned into a short spontaneous film. His name is Jack Weisberg.

Two years later I was notified by Jack’s nephews via email that Jack has passed away on March 27, 2008. Here are his words; “My uncle Jack passed away yesterday. You should know that your video is quintessential Jack Weisberg. In many ways, your interview is a time capsule of all that made him who he was. As a New Yorker, Jack’s final request was perfect. Appropriately, he requested that he be cremated, and his ashes be spread in Central Park. Thank you. -Stu Wexler” “Jack Weisberg was my uncle. I thought you might like to know that Jack, the subject of one of your film, “Spontaneously Yours (with Jack Weisberg) (New York) 2006″, died this week. Your film does a wonderful job of capturing Jack’s spirit and we thank you for it. -Alan Rosenfeld”

0
Filmed in Union Square park NYC, this film portrays an artist by the name Edwin who puts out huge provoking signs in visible places of New York city ever since 9/11. Anyone who support him with the messages he paints on these signs can put a signature or any message with a marker for a small donation. Presumably Edwin’s dream is to put these messages in the museum of 9/11. This film was shot completely spontaneously.

One evening in Times Square I spotted a man by the name Launey who was wearing a clock on his chest with the word “MAN” on it. I approached him with the camera rolling and this turned to a spontaneous film where we asked men passing by to show us their “Public ID”.

What is one thing missing in humanity that can improve the quality of life for all humans of the world? This is exactly the question posed in this documentary filmed gorilla-style by approaching over a hundred people on the streets of NYC. This film was initially shot on the Halloween day of 2003 in the Greenwich Village, and later in the Times Square.

0
What makes LA people plastic? This very question was addressed to some of the people living in LA, specifically in West Hollywood.

Walking through the streets of Manhattan, this is Spontaneously Yours with Steve Cohen who shares his perspective on memetics, genealogy, racism, the importance of having a taste, what’s the difference between a genius and a typical person.

Love. What is it anyway? I decided to find out what the people of New York can share about how they understand Love. Of course, there is no way words can express what Love is, it can only be felt, but I decided to seek out anyone who can articulate it. After all, if one truly experienced Love, I mean truly truly, then he/she can simply close the eyes, and while browsing the imagination, articulate it verbally. This project was shot on the streets of NYC in June through August of 2004 in a “chain-reaction” style, meaning – some of the interviewees became interview hosts to interview others, making this project multi-dimensional.

The Truth Is… project was launched in April 2004. It began in NYC, following by Holland, Belgium, Germany, Russia, Italy, France, Spain, London, Israel, Egypt, many US States and Canada.

What is the truth? And why is everyone searching for it? Why is the truth painful, at times? This international film project portrays the views of thousands of people around the world, who were spontaneously approached and asked a simple question, “What is the Truth for you?”

They held a painting frame as if in a portrait and spoke their inner truths. The outcome shows the contrasts in how each person sees what truth is.

0
Renat Zarbailov converses with people of all walks of life about whether they would rather have a lot of friends or a lot of money. This short film was shot in the Times Square in April 2004.

What is one thing missing in humanity that can improve the quality of life for all humans of the world? This gorilla-style documentary explores this question by approaching over a hundred people on the streets of New York city. This film was initially shot on the Halloween day of 2003 in the Greenwich Village part of Manhattan, and later in the Times Square.