Daniel Bodner (b. 1963) began painting in New York in the mid-1980s with a focus on the human figure. Following his move to Amsterdam, Netherlands in 1990, he explored space in relation to the figure, making unplanned and organic paintings from an interior dialogue. In 2005 his focus shifted to the depiction of light as it describes or sometimes obliterates space and figures. His paintings have formal qualities that recall decaying photographs or artifacts, and surface textures that reference mold and oxidization — qualities that are visual metaphors for the human experience, and refer to themes of solitude, alienation, memory and desire. 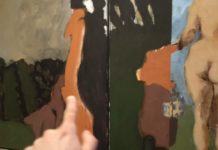