Home Legacy Films No love for the NYPD (New York) 2005
Share on Facebook
Tweet on Twitter
Filmed in Union Square park NYC, this film portrays an artist by the name Edwin who puts out huge provoking signs in visible places of New York city ever since 9/11. Anyone who support him with the messages he paints on these signs can put a signature or any message with a marker for a small donation. Presumably Edwin’s dream is to put these messages in the museum of 9/11. This film was shot completely spontaneously.

One evening in Times Square I spotted a man by the name Launey who was wearing a clock on his chest with the word “MAN” on it. I approached him with the camera rolling and this turned to a spontaneous film where we asked men passing by to show us their “Public ID”.

What is one thing missing in humanity that can improve the quality of life for all humans of the world? This is exactly the question posed in this documentary filmed gorilla-style by approaching over a hundred people on the streets of NYC. This film was initially shot on the Halloween day of 2003 in the Greenwich Village, and later in the Times Square. 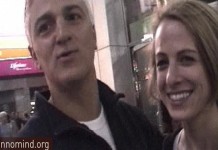