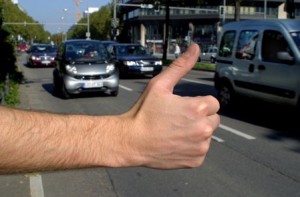 The most spontaneous thing I ever done was in Amsterdam when I was filming The Truth Is… project in 2005.  I was couchsurfing there and my hosts mentioned about hitchhiking. The next day a girl participating in my project liked it and suggested to visit Brussels. When I told her that I am a starving artist, she said that I could hitchhike there, about 3 hours away from Amsterdam by car. She starts drawing the map showing how to get on the outskirt of Amsterdam to get on the highway. She even told me how to sneak in at the rear of the tram to avoid paying 2 euros. I really felt the sign… two mentions about hitchhiking within last day or so, that’s definitely a sign.

So, it’s noon, October sunshine, I have all the ammo (batteries, recharger, 12 video tapes). I follow the girl’s map, see a huge hotel next to the highway, waltz into the restaurant of it, ask for a piece of carton and get offered a marker as well. Make a sign that say on one side BRUSSELS, and the other side – UTRECHT (that’s about half way to Brussels suggested by the guy who gave me the marker). Standing at the last traffic light towards the ramp heading towards Brussels. One hour passes, no one stops, make a phone call to my couchsurfing hosts to let them know about my rendezvous that could stretch out to maybe even couple of weeks, get a blessing, leaving my whole editing equipment, about $10k worth at their. Fifteen minutes later a small car picks me up with two guys in it, they drive me to Utrecht – half way to Brussels, drop me off at a gas station which doesn’t receive too many cars. I wait a bit and head out to the side of the highway while still looking over to the gas station to flash the sign at exiting cars when with a tip of my right eye I see a car slowing down pass me, I turn around, the car stopped waiting for me… 🙂
I run up to it, the guy tells me he’s going home to Gent (already in Belgium) located an hour away from Brussels. I’m in his car and I ask him if I can use his internet to hopefully find a place to stay on couchsurfing.com in Brussels, he says even if you don’t find you can stay with us for the night. Yay!! 🙂 One the way to his place his friends call him and invite him to a romantic dinner party, he asks me if I want to join… I felt like I was dreaming this.. Gent is amazing city with some of the kindest people humanity has to offer. I ended up staying there for five days.

One foggy cold morning I finally hitch a ride out to Brussels, mind you still not being able to find a place to stay there. I get to Brussels and it turns out to be the worst place ever for filming The Truth Is… project. People are very snobby and don’t want you to approaching them speaking English, like in Paris. So after a few hours of disappointment and seeing the Moniken piss (the little pissing boy, who saved Brussels from Nazi’s bombs) I get to film a Russian couple around 60 year old who told me that they are from Brooklyn as well on vacation in Europe, and in three hours taking their rental Mercedes back to Dusseldorf Germany, about 5 hours driving, they came to see Brussels for a day or two. The guy says, well if you come by our hotel at the time we leave you can join us to Dusseldorf. Couldn’t be better, screw Brussels!!! (this was the destination mind you.. :). I am all exuberant like I am on LSD, head down into Brussels subway to kill time, film the “Subway people” project of mine (I have footage from most major cities around the world I’ve been to). At their hotel I see an internet terminal, free for the guests, I get on it and start sending out requests to couchsurfers in Dusseldorf, asking if they say yes to include their address and cell # so I can just call them and head out to them upon arrival.

Five hours later we are in Dusseldorf, they drop me off in a small town on the outskirt of the city. I quickly find internet cafe, log on, one guy says I can host you but tomorrow evening, luckily he includes his cell, and it’s around 6pm. I call him and tell him the situation, he says no problem, tell me directions to take a 2 euro rail and he will meet me up at the station. I didn’t see him so I headed out straight to his address. Ten fifteen minutes later he shows up at his door step and another five days of my life get spontaneous rendezvous in Dusseldorf. I hitch a ride to the capital of Germany – Berlin. Took about 6-7 hours, switching at least 7 cars/trucks and then a cheap 5 euro ride on the rail. I arrive in Berlin and my host picks me up from the train station, despite having a cold, shows me Berlin in his white Mercedes for 45 minutes as if I am the president of the world :). I have another five days of exuberance in Berlin, eating Turkish doner on the cheap, visiting art scenes and making friends right and left. Hitch a day’s worth trip back to Amsterdam switching so many cars/trucks I lost count… By the time I am back with my couchsurfing hosts in Amsterdam I realized that within these two weeks I only spent around 20-30 euros…